But isn’t your purpose supposed to help people or something? Not just be some kind of ongoing monologue about fruit and how you barely have any responsibilities?  People are eventually going to figure out these aren’t really recipes… Salt, pepper, olive oil and vegetables does not a recipe make.  Great, you were called to be a calm, moderate person who eats well…  riveting.  Readers are going to love this.  It all seemed a little puzzling to me but I continued.  I hoped to chalk all this talk up to my head cold bothering me and continued to make dinner.

“You’re definitely sure you’re not supposed to like, go back to school or something?” (Chops an onion).

“I am still not totally convinced this is a responsible use of my time…” (Slices some leaks).

“I mean…cooking?? …For myself??” Speaking of cooking for myself, maybe I should give online dating another try. (Dices some potatoes).

“Whatever.”I decide.  Tonight I am just making dinner and I will leave tomorrow to tomorrow (yeah, because THAT seems responsible…). But that’s the whole point right, let go and let it flow?  Let’s not ruin a good cook session with all these silly questions. It doesn’t feel quite as impactful as I’d like but if it’s my thing, I guess it’s my thing.

I had my heart set on making my mom’s potato cabbage soup for weeks. It was so comforting and tasty and I knew with this head cold it’d be just the thing I needed.  After getting the recipe from her, I compared it to my Whole30 approved foods realized I could have two ingredients: potatoes and cabbage… three if you count salt.  Ok, well that sounds pretty gross so I guess we’ll just go with what I’ve got instead: Italian Sausage.  Perfect.

The next 45 minutes or so I spent making this soup.  It was amazing!  Spicy, comforting and everything I was hoping it would be.  By this time it was 8:30, I was feeling the effects of my cold; I was spent.  On any other night I would have cleaned up and gone to bed but because I wanted to share this recipe with others, I knew I needed someone else to try it.  A perfect job for a focus group (aka my parents).  I knew they weren’t home so I would just drop it in their fridge and leave.  It was already late, cold, rainy, I was sick and they weren’t home… ok, 15 min trip max.  I can handle that.

As I am walking up to their house, I hear a faint murmur through the rain.  I couldn’t make it out what it was but assumed it was just coming from inside a neighbor’s house.  Then I heard it again.  It was so faint, but something about it seemed odd.  I had to know what it was. I set the food down on their steps and slowly walked out from under their porch, into the rain, and onto the front lawn to see what it could have been.  Every house in the cul de sac had their lights off.  Inside, outside, as dark as they could be.  Finally, I hear it again, “Heeeeellllppppp!!!” This time it was clear as day.  I scanned each house.  It was trash night so everyone’s large trash cans were out on their driveways.  Suddenly out from behind one of them, “Are those legs?!”  I ran over to the house, calling to the person to let them know I was coming, halfway terrified of what I might find.  I come around the side of the driveway to see my parent’s 91 year old neighbor laying on the ground, umbrella to one side and a small bag of trash strewn to the other, holding his arm to his chest.  His white button down shirt soaked in blood.

“Is THIS destiny?” I am thinking to myself. “Is THIS why I am here tonight?!”

I call 911, wake up another neighbor to help me and together we help him inside.

Soon the firefighters and EMT’s arrive.   Mid conversation with some tall, dark and handsome firefighter about what had happened previous to their arrival, I realize, “Heeeeeey wait a minute..Is THIS destiny?? Is THIS why I am here?!  So much freaking destiny; this is amazing! What a story we have unfolding here!  Someone get Anderson Cooper on the horn!”

A moment later I look down at my teal athletic socks that I am wearing with ballet flats, which are all soggy from the rain by this point (remember, I wasn’t supposed to see anyone… 15 minutes TOPS is what I was told… I did dress appropriately for that… unfortunately that didn’t happen…).

We all move to the kitchen to assess the situation.  While petting the neighbor’s tiny poodle, meeting his wife and cancelling my dreams of marrying a man in uniform, I learn that the neighbor’s name is Raymond.  The EMTs start going through some questions with him.

“Do you know what month it is, Raymond?”

“Oh yes, it’s still January.” He says modestly, seemingly embarrassed by the fuss everyone was making.

“Do you know who our President is?”  He straightens up his shoulders, standing a little taller and replies,

“Yeah, I think he’s going to be ok”. My strapping, ex fiance replies.

But I couldn’t go.  I just sat in my car to take in everything that just happened.  Somehow in the matter of an hour I went from sick at home and ready for bed to standing in my neighbor’s kitchen, wet from the rain, watching paramedics work on this 91 year old man whose arm had been cut to the muscle and was heading to the hospital.

What in the world is happening?  What would have happened to him if I didn’t happen to be here?

This is what I know: If I weren’t writing and cooking and doing whatever the heck it is I am trying to do here, I wouldn’t have been there.  I don’t know what would have happened if I hadn’t been there.  I do know that it was better for Ray because I was, and that’s enough.

When you’re where you’re supposed to be, doing what you’re supposed to be doing, sometimes you just end up in the right place at the right time.  Maybe it’s a door that opens, maybe it’s someone you meet and if you’re especially fortunate, maybe you’re able to make a difference to someone else.  At the end of the day, that’s the thing with this “calling” business; you don’t choose it, it chooses you.  And you sure as hell had better listen if you’re hearing it.

I mean, I can’t say that making soup saves lives, but it sure helped my old friend Ray, here…

The idea for this soup came from a potato and cabbage soup that my mom used to make growing up.  I had hoped to make it while I was on Whole30 but realized most of the ingredients wouldn’t work since there was a lot of milk, flour, butter, etc.  I added italian sausage to make it a little more savory and instead of cooking it with cabbage in it, serve sauerkraut on the side to be added to each bowl upon serving.  This allows the cabbage to stay crisp and crunchy and also gives you all the probiotic benefits of sauerkraut.  I hope you enjoy it! 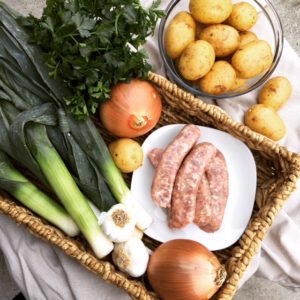 1 lb. Mild Italian Sausage (if in casings, remove casings prior to cooking)

2 Tbs. Cornstarch (or arrowroot powder for Whole30 or all purpose flour)

Up to 4 cups Bone Broth (I found a great beef, turkey and chicken blend that worked really well.)

Brown sausage in a dutch oven or heavy pot.  Brown it like you mean it – crisp edges and a nice deep brown color, breaking it up into smaller, bite sized chunks.  Add in red pepper flakes (add more later if more heat is desired).

Stir in onions and leeks and saute until onions become somewhat translucent.  Stir in garlic until incorporated and becomes fragrant..

Scrape the bottom of the pot continuously to pick up any brown bits off the bottom (we want those mixed in, not attached to the pot).

Stir until evenly distributed over onion, leek and sausage mixture (still scaping up any bits from the bottom of the pot).

Add bone broth – enough to completely cover sausage, veggies and potatoes completely and just over.  You can always add more broth later but we don’t want too much liquid so that it has more of a rich, stew like texture instead of a thinner soup.

Simmer uncovered until potatoes are tender and sauce has reduced to your liking.  If it looks like it needs more liquid, add some more of the broth.

You can add more coconut milk as well but too much will make it sweet so use moderation.

Add salt and pepper to taste.

Serve with flat leaf parsley and a hearty spoonful of sauerkraut stirred in.